There is my tribute to the Ashura-ou/Taishakuten relationship. Really Taishakuten really -did- love Ashura-ou.. loved him enough to manipulate fate for him.

It is Shunsui and Ukitake's wedding day!

That is the only engagement that I will respond to. As soon as I type up Ukitake's vows, I am going to go get food for the day.. little snackies that'll tide me over.

Had a wierd dream about Yo. I know she has a small crush on me but this is ridiculous. I don't want to be having those sort of dreams about Yo. REALLY. Also in the dream appeared pumpkin bread, which I know was a tribute to Alexi in the dream. Too bad I don't write my dreams down.. I used to though, I think there I have the "I have sex with ID" dream recorded. Of course there I also have recorded the "

mamorunooni hits on Magus" dream. Because damn it, you know that Jesse would be gay for Magus. He's only TOLD me this 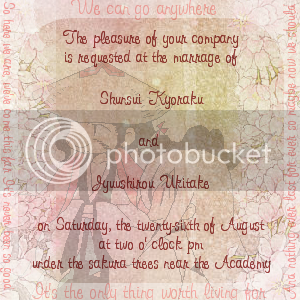 Muse Wedding has Started! Just had to post up the invitation. Isn't it cute!

Today is Ukitake's day.. so there will only be Ukitake icons used for the posts of this day.

Comments: This is the famous -wedding- song for my Ukitake muse and Mish's Shunsui's muse. It was chosen because we heard this song initially.. (well Mish did, I had pinned "Home Again" by Dirty Vegas for their song..) and we thought it was perfect for them, and really after "Home Again", we decided that really Dirty Vegas was their official OTP group for us. An excellent song, I really do love it and it's very casual and very much -them-. (When I think of pairings that are casual and not too wildcardish, that is Shunsui and Ukitake. A very loving stream that flows through the caverns of the heart.) And really I guess it was fitting that they get to have thier wedding. (And we're pretty sure that after Heyven and Sigele, Gojyo and Hakkai might have their time). Just think. Last year around this time, Hyuga and Sigurd were getting married!

Notable (Favorite) Lyrics: | "So come on and take my hand, we can go anywhere. Can you see what we've got? The only thing worth living for is love?" |

Remember if you download, then by all means comment to tell me you nabbed it, and if by any chance it says that the link expired or is broken, then prod me in comments so that I can re-upload it. *hint: I also like to hear reactions to the songs that you download*

Note: I will only re-up those which are on the most current version of the daily download. Once the link disappears, no more re-upping it until the next time it is chosen in a daily download. So be sure to grab all links while they are hot. ^_^